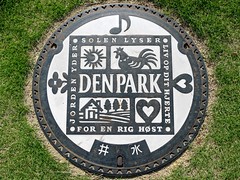 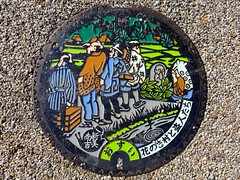 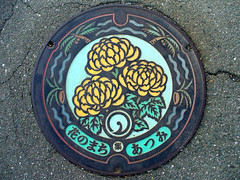 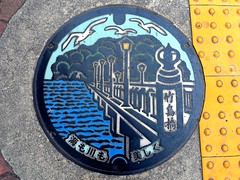 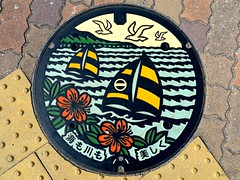 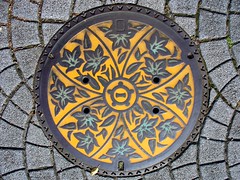 I had no idea Japan was home to arguably the world's best looking manhole covers. Bonus points for geotagging every photo to help other manhole cover photographers discover these gems.

Speaking of Columbia, my favourite Long Winters song, The Commander Thinks Aloud, is about the Columbia disaster. I never get tired of this song, John Roderick's vocals, lyrics and song writing capture the moment perfectly.

Check out some of his acoustic versions too - in some ways, better than the original.

Update (July 2018): I’ve recently re-listened to this song and its still an all time favourite. I’d forgotten though, about the story behind the drum track played by Matt Chamberlain which is fascinating. I first heard it on the Song Exploder podcast, listen below – the story about the drum track starts at the 8:40 mark.

“And he managed to, not just introduce swing into it, but make this piano part, which, on its own is very square and, and on top of the beat. And he played to it, and introduced swing to it, played a little bit behind and a little bit with this tremendous sort of breath and energy. And watching it all happen was a revelation to me as a musician, I understood how much I had to learn.

“So what Matt did, he came in, he set up his drums and he had one microphone, that he pulled out of a bag, he set up himself. And we all just were watching him, you know, like you would watch a black panther that came into your kitchen, like ‘what’s it going to do?'”

How the Matt records his drums is incredible, John Roderick’s story telling makes the whole podcast well worth listening to.

I remember when both happened, so disappointing to see how much of it was the fault of bad leadership and management.

John Gruber at Daring Fireball has written a great piece on the “New Apple” under Tim Cook.

“Only Apple” has been Tim Cook’s closing mantra for the last few Apple keynotes.

I’ve been thinking about this for two weeks. Who else is even a maybe? I’d say it’s a short list: Microsoft, Google, Amazon, and Samsung. And I’d divide that short list into halves — the close maybes (Microsoft and Google) and the not-so-close maybes (Amazon and Samsung).

Worth a read, as usual Gruber nails it with some astute observations on some of the subtle and not-so-subtle changes in Apple since Tim Cook took charge.

Tokyo artist, Hayashi Natsumi, takes daily self portraits of herself 'levitating' in various locations. (via nippon.com)

Chet Faker playing on repeat, it must be Friday!

Andy Ihnatko talking about Swift on the MacBreak Weekly podcast (around the 1:16:30 mark):

But it really does make the tent a lot bigger, I think now that Apple kind of stopped boasting about the number of apps that are available for it, they really want to foster the sort of apps they want to put in a commercial. Because that’s where the strength of the App Store is, these apps that are beautiful, they are pretty, even though they do just one thing they do something spectacular that you wish you had thought of because it is such an elegant solution to a real world problem – and when you have a programming language that’s not as intimidating as Objective-C, that means that you’re tapping into the creativity of a much larger range of developers out there.

I hope he’s right. I think he’s spot on when it comes to opening the app store up to a much larger range of developers, but I’m not convinced that the improved simplicity of the Swift language and the expected increase in developers will necessarily result in a noticeable improvement in the standard of apps sold in the App Store. It may well have the opposite effect.

Barely 24 hours after most of us first heard of it, Ray Wenderlich is already adding Swift resources to his site. The Swift Cheat Sheet and Quick Reference is a great start.

I finally managed to get round to watching the WWDC keynote, I thought it was generally pretty good as far as WWDC keynotes go.

Here are some first impressions:

As predicted no hardware was announced. To those that understand what WWDC is all about (a software developers conference) that comes as no surprise. Like John Gruber said yesterday, it’s going to be a busy second half of 2014 for Apple product announcements.

As usual, John Gruber at Daring Fireball has a good rundown of what to expect at tomorrow’s WWDC keynote.

I’d love to be proven wrong, but my gut feeling is that we might not see a single new hardware product tomorrow. It’s going to be a busy second half of 2014 for Apple on that front.

It all makes sense, however I can’t help feeling Apple might be keen to break this predictable cycle they’ve found themselves in over the last few years. I’m probably wrong but I wouldn’t be surprised if they pulled a rabbit out of the hat tomorrow, what a lot of fun that would be.

UX/UI and Branding Architect, Jay Machalani has come up with a great interface concept for iOS he calls the “block system” for displaying simple app data right on the home screen, similar to Windows Phone tiles or Android widgets.

On iOS you can’t do shit. You have to open and close every single application. Open mail, check your Mail, close Mail. Open Facebook, check Facebook, close Facebook. You might say that your notification center helps you on this –true- but what about news or just looking at the latest photo a friend posted, there’s no notification for that. You have to hunt for the content you want or might want. iOS basically gives you a static grid of everything you have on your phone and tablet and you need to go through all of them to get the content you want. You can change the backgrounds and move around your icons, but that’s basically it. No functionality, no features, no personalization… nada… zero… absolument rien… kedal.

It’s highly unlikely we’ll see anything like this in the upcoming iOS 8 but I sure hope Apple notices this, the current interface really could do with some improvements along this line.

In less than 24 hours, Apple’s 2014 World Wide Developers Conference (WWDC) kicks off. Here’s a great summary of the past ten years of WWDC keynotes by Harry McCracken:

Sure, consumers are watching, and Apple hopes that they’re dazzled. But WWDC keynotes are usually the least gadget-centric events which Apple holds, and even though people who covet new Apple products pay close attention, they’re not the primary audience.

One of the things I find most interesting about this article is seeing the almost exponential rise of Apple’s share price over those ten years. Starting at $16.25 in 2004 and peaking at $576.16 in 2012 (and currently $633 pre-WWDC 2014), it’s remarkable that the company continues to attract so much negative criticism from analysts.

Considering most Apple keynotes happen at around 2am here in Brisbane, I’ll be catching up on it a few hours later.